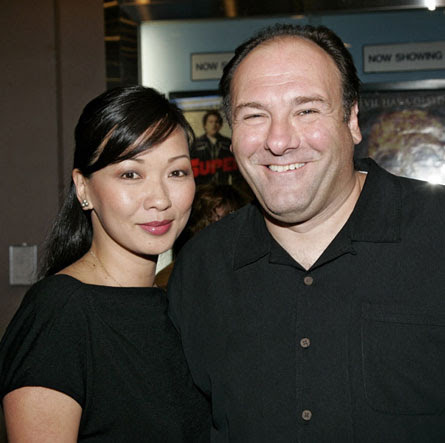 Deborah Lin is my favorite ho of the day! The 40-year-old "former model" married 46-year-old James Gandolfini in her hometown of Honolulu, Hawaii yesterday. The gold diggers are taking over the world. Watch out BABIES!!!

Okay, Deborah might not be a gold digger, but would you marry Tony Soprano if he didn't have money coming out of his chunky ass? Answer me that!

The two became engaged late 2007 after going public with their relationship earlier in the year.

The wedding was attended by a bunch of hos. Deborah was a dress. James wore a tuxedo. They ate cake and they danced. Typical wedding shit. A witness told People, "It was amazing. James ate the whole fucking cake in one gulp! I've never seen anything like that before." No, the witness said, "There was a nice big kiss at the end with both hands on the cheeks. They looked great."

Well done, Deborah! Although, she's working hard for that money! Her arms must be sore as fuck from having to hold up James' FOPA while riding his willy all the time.
Posted by Nani Hoaloha at 6:59 PM